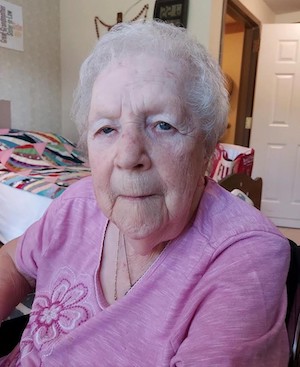 Madeleine was born August 8, 1931 in Manchester, NH to the late Wilfred and Alice (Dupont) Plourde.

Madeleine and her husband, Herve, raised their family in Henniker where Madeleine served on the School Board for a brief time, served on the St. Theresa’s Parish Council, worked at The Country Maid Market, New England College and for the Boundtree Corporation. She was well known to be of great service to many elderly citizens of the town.  After Herve passed away, Madeleine spent 17 winters in Dundee, Florida.

She listened to Lawrence Welk and several Irish singers. Her two favorite shows were Heartland and Blue Bloods. Madeleine was a faithful Roman Catholic who watched the Mass on TV whenever she couldn’t attend in person. She frequented the Sacraments as often as possible and prayed the Rosary daily. Last, but not least, anyone who knew her could tell you she was one of the Red Sox most loyal fans.

A Mass of Christian Burial will be held Saturday October 8, 2022 at 11 am at St. Theresa’s Church in Henniker, NH, with a one hour viewing before the Service.

The Holt-Woodbury Funeral Home & Cremation Service in Hillsboro, NH is assisting the family.