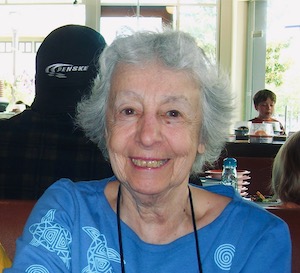 She attended Bennington College in Vermont where she studied theater, dance, music, and political science. Joan Lettvin raised three children and spent summers in NH with her husband Theodore Lettvin, a renowned concert pianist. In 1977, she created Performing Artists Associates (PAA) of New England.  Her endeavor spawned other offices that provided both understanding of the ‘Arts Management’ process for young artists, and an affordable resource for audiences throughout the United States.

In 1992, the Lettvin Concert Series started in Bradford NH, when her husband Theodore Lettvin played a concert to raise money for the Bradford Meeting House. The concerts have continued since 1992 with only the pandemic causing a cancelation in the series. Joan has continued to support the people, institutions, and the arts in Bradford NH to this day.

Mrs. Lettvin moved to Seattle WA to be with her daughter and grandson, Alexander, where she was active in the arts, her family and social endeavors. She continued to spend summers in Bradford NH, and moved back to NH at the onset of the pandemic.

Mrs. Lettvin was very proud of her children, Rory (and Colleen) Lettvin, Ellen Lettvin (deceased) and David (and Daya) Lettvin, her grandchildren, Alexander Ivanoff, Yael Lettvin, Naama Lettvin, Dekel Lettvin, Kessem Lettvin, Madison Lettvin and Theodore (aka Teddy) Lettvin. Mrs.  Lettvin was very proud of her husband Theodore Lettvin’s career, and her work both as an artist, an arts manager, and as a consumer of art, music, and literature.

Mrs. Lettvin loved nature, great music, art, food, drink, and company.  She requests that in lieu of flowers that you take your family out to a lovely dinner, an entertaining performance, and you hug and kiss the ones you love, and remember to think fondly of those who cannot be with you.

There will be no service at this time.