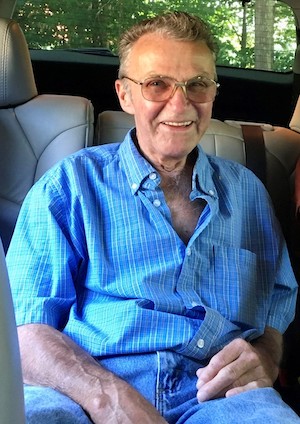 HILLSBORO, NH:   It is with heavy hearts that we announce the passing of our loving father, Darrell Roy Learn, on October 17, 2022.

Darrell was born in Shinglehouse, PA on May 26t, 1943, to the late Clair and Mildred (Kshir) Learn. His siblings include Dorothy Druso, Keith Learn, and the late Allen ‘Bud’ Learn.

After high school, Darrell worked a variety of jobs including logging with his father, factory work and after some time, moved to NH for work in water well drilling. Prior to being drafted, Darrell enlisted in the US Army and was attached to the HHC, 4th Battalion, 64th Armor as a 05B20 Radio Operator.  Dad spoke of his time overseas with his vehicle that carried the radio equipment. Traveling ahead of the aircraft alone to discover a high vantage point that he then could communicate the target coordinates for the joint forces would navigate to. It was a large amount of responsibility for such a young man.

Darrell met his future wife, Terry, in Shinglehouse and the two were rarely separated after that. Married in 1967, they moved to NH in 1969 and lived in Hillsboro for the next 31 years, happily married, until her passing in 2003. He would not ever meet anyone else as she was his soulmate.

Darrell worked for over 40 years as a commercial water well driller for Layne covering all the New England states and finished his career as the Drilling Superintendent. After retirement he spent his summers in the woodlot, cutting and splitting firewood. This was truly an enjoyable and productive pastime for him.

Darrell was among the founding members of the Hillsboro Night Riders snowmobile organization and along with other members built and ran the snowmobile themed carnival game at the fair for several years. He and our mother enjoyed riding snowmobiles together and participating in club activities. He also enjoyed target shooting, hunting, and trout fishing. In the springtime, you could find him navigating Beards Brook with his two boys at their favorite spots.

On holidays or any special occasion Darrell embraced being surrounded by his close family and never missed a chance to spoil his grandkids. Members of his family include his son, Dana and wife Christy, their sons Daniel and Aidan, Darrell’s youngest son Daniel, his wife Kelly, and their children Kayla, Justin, and Jacob, and additionally, his one great grandchild, Griffin Geary.

He is predeceased by his wife Terry (Hawley) Learn.

Services will be held at the convenience of the family.

In lieu of donations or flowers, Darrell would ask that you enjoy quality time with family and friends.