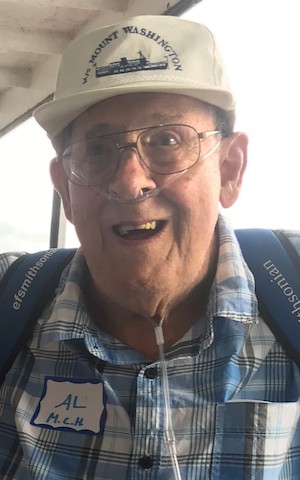 He served in the Army during the Korean Conflict. After his time in the service he lived in Windsor Locks, CT and worked at Flight Enterprise.

After he moved to Brattleboro, VT, he met Beverly Phelps and they were married in June, 1962. In 1965, they moved to Greenfield., NH, where they purchased a home and raised three sons. During the summer, the family spent time at vacation cabins at different lakes in NH and VT, bringing a boat to fish and enjoy the water. The station wagon and trailer were filled.

Al, known to family as Johnny, enjoyed working in his garden, raising vegetables for his family to eat year-round. His habit was to pick a vegetable (radish, bean, or cucumber) rub off the soil and eat it. There is nothing fresher than that. He taught that to the whole family. In later years, he was a great supervisor.

Albert worked at NH Ball Bearing for 34 years, retiring in 1998.

He was an active member of the Greenfield Covenant Church for many years, enjoying talking with everyone at the fellowship time. He always cherished any time with his family especially holidays.

He is predeceased by his brothers, Donovan and Arnold, and sisters ,Thelma and Joyce. He is survived by his wife, Beverly, his son, Preston and wife, Linda, his son, Glenn, his son, Brian and wife, Mary, granddaughters, Jenny and Mercedes, and grandson, Brian.

A Memorial Service will be held November 6th  at 2:00 pm at the Greenfield Covenant Church, 12 Depot Drive, Greenfield, NH

In lieu of flowers, donations may be made to the Greenfield Covenant Church in his memory.