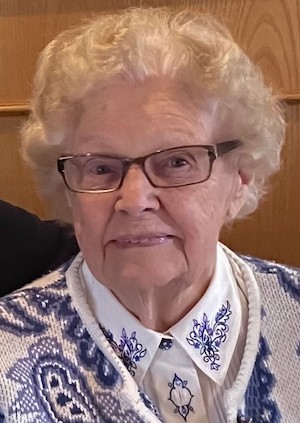 Norine was born and raised in Antrim ,NH to Susan (Maxwell) Edwards and Ellerton H. Edwards. She was known as “Aunt Nody” to her nieces and nephews and “Nody” to her bridge clubs.

Norine majored in Home Economics at the University of NH, graduating in the Class of 1944. Because it was wartime, before graduation she began teaching in Colebrook, NH, where she also coached basketball. She later taught junior high school home economics in Portsmouth, NH, Newton, MA and Brookline, MA. She was married to William Sipe, MD, and moved to Derry, NH where she raised her children until moving to Adams, MA in 1964. There she resumed her teaching career for one year before moving to Goffstown, NH.  She lived the rest of her life in Goffstown.

For most of her career, she taught high school Home Economics in  Goffstown, NH and Manchester Central HS, where she was Chair of the Department of Home Economics and taught until she retired. She also continued to substitute at Goffstown High School until the age of 70.

While teaching and raising four kids, she commuted to UNH Durham to earn her Master’s Degree. Home Economics was never about cooking and sewing for Norine. She also managed the school cafeteria in some of her early teaching positions and felt strongly about integrating nutrition education with cafeteria services. Her master’s thesis is a study of training and employment opportunities for child care workers, combining her interests in child development, opportunities for working mothers and vocational education.

Norine was fiercely independent, and cared for herself until her death. She was a life-long bridge player, and she loved her house, her garden, and backyard birds. Her values were extremely important to her. In particular, she valued education and loyalty to family.

Norine was a dyed-in-the-wool Granite Stater, She was proud of the University of NH, and clipped articles about research and other developments at UNH. She supported charitable causes that focus their work in NH, and was also a supporter of children facing challenges both academically and in their personal lives.

In lieu of flowers, the family asks that donations be sent in Norine’s memory to the University of New Hampshire (unh.edu/give), Families in Transition (122 Market St, Manchester, NH 03101) or Crispin House (PO Box 411 Goffstown, NH 03045)

There will be a memorial gathering at a later date.