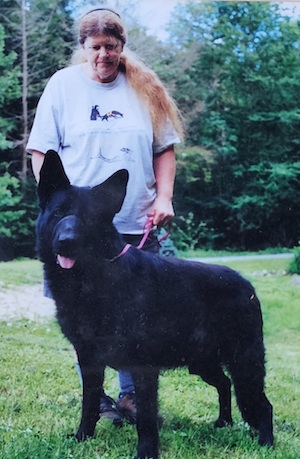 She was born in Belmont MA in December of 1939 and grew up in Winchester, MA.

Annabella was a very talented artist and attended Rhode Island School of Design where she developed her skills further.  It was said by many that she had a true ability for capturing the essence of her subject in all her work. After college, this talent led her to employment with the Trailside Museum just south of Boston, and later to a job doing illustrations for the Boston Zoo.

Around this time, she discovered her true interest was in raising and training German Shepherd Dogs which she did for nearly 60 years.   She bred her own line of primarily black German Shepherds and in doing so brought love and enjoyment to countless others.  In addition to raising them, she was a life time member of Search Dogs Northeast and helped on numerous search and rescue missions over several decades.

She leaves behind her three children, Joanna, Karen and Geoff, six grandchildren, Samantha, Travis, Dan, Josh, Ashlyn and Seth and her two great-grandchildren, Elizabeth and Ryleigh.

A celebration of life is being planned for a later date.