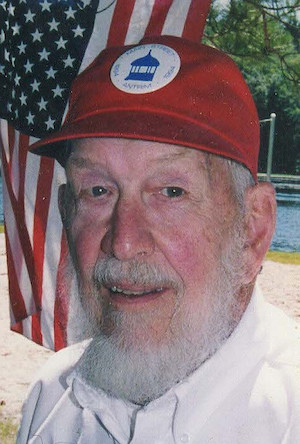 ANTRIM, NH:  In her poem The Dash, Linda Ellis writes, “What matters is how we live, and love and how we spend our dash.” Born in July of 1925, Martin’s dash spanned 94 years and 10 months. He was a life-long resident of Antrim NH.

His life was filled with service to his country, in the Navy as a Yeoman Second Class on the LSM44 in WWII when he was deployed to the Pacific, including Okinawa and Iwo Jima, to his community, as Town Clerk, Scoutmaster, and to the Goodell Company as a payroll clerk. He was the treasurer of the Maplewood Cemetery Association, life-long member of the Antrim Players and of the Meyers-Prescott-Olson American Legion, Post 50.

Martin was an award winning fisherman, accomplished sailor, a prolific stamp collector, model train enthusiast, penny poker player and dedicated assembler of jigsaw puzzles. He raised sheep, chickens and December, the cow. He loved his dogs and cats; Heidi and Dutchie were favorites.

Traveling to Scotland, annual Navy reunions and summer camping trips created special memories. His vegetable gardens were prolific and he was a dedicated Boston sports fan, which his extensive collection of ball caps attests to.

Of all the ways Martin spent his dash, family was the one that he cherished the most. His parents, William Ambrose and Ethel Flora Nichols, brother Carrol Nichols and nephew Brooks Nichols preceded him.

Martin is survived by 15 great-grandchildren, 8 grandchildren and four children, Nancy Haggarty,
Charles McLean, Jane McLean and William Nichols and by his brother and sister-in-law, Charles and Nancy Lee.

He has found peace and is now reunited with his love, his wife of 69 years, Isabel Butterfield
McLean Nichols. He was loved and will be missed, his dash well spent.

Special thanks to Scott Farrar nurses and staff for their care and kindness during the past three
years.

A memorial celebration will be planned in the future.

In lieu of flowers the family asks that donations be made to the Antrim Historical Society, a
Humane Society, Meyers-Prescott-Olson American Legion Post 50, Scott Farrar’s Jenny Scott
Legacy Fund in Peterborough, NH or to the charity of your choice.