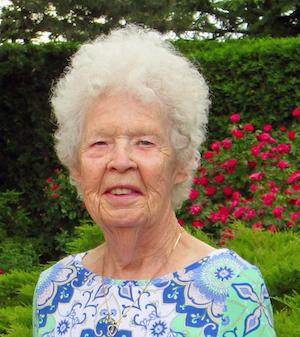 HILLSBORO, NH:  Constance (“Connie”) June Grimstad, 91 years old, took her last breath at midday, June 19, 2020, at her family home in Hillsboro, New Hampshire, surrounded and supported during her final days by her family, many of whom traveled many miles to attend her.  Connie was born November 6, 1928, in Hillsboro to Romeo Onesime and Nina Francis (Saunders) Duval, who both preceded her in death.

Connie was a graduate of Hillsboro High School in 1946, and worked for the New Hampshire State Library in Concord, New Hampshire until her marriage to Thomas Theodore Grimstad on October 29, 1949, who was in the US Air Force at the time.  She accompanied him to several military posts during the early years of their marriage, before they settled to raise a family in Milwaukee, Wisconsin, relocating a few years later to Columbus, Ohio, where they remained for their 62 years together.

Among other adventures, Connie and Tom built and operated a Bed & Breakfast on Madeline Island, Wisconsin for more than a dozen of their “retirement” years.  Following the death of her husband in April, 2012, Connie shared visits with her brother, sisters, and her children, grandchildren and great-grandchildren for the next 8 years, settling with her daughter Sandy at the family home in Hillsboro.

Connie’s interests for the most part centered on her family, visiting them often as her children started families of their own, doting on all her family, but for the last few years on her great-grandchildren especially.  Always positive, agreeable and never wanting to be a burden (which she wasn’t), she enjoyed travel, visiting many relatives throughout the United States, reading novels and watching PBS mysteries and miniseries as they came her way.

Connie is survived by her son, Paul (Patricia) Grimstad, of Darlington, Maryland, and three daughters, Sandy Grimstad, of Hillsboro, Kathleen (Kevin) Craig, of Lancaster, Ohio, and Heidi (Rob) Moore, of Sunbury, Ohio; by her brother, James Duval, of Palmetto, Florida and her sister, Mary Duval, of Venice, Florida; by her grandchildren, Ian (Julie) Grimstad, Abby (Aaron) Fernaays, Jeremy (Martyna) Moore, and by her six great-grandchildren: Jackson, Julianne, Riley, Owen, Olivia, and Sofia.  Connie was predeceased by her parents, her brother, Frank Duval (late of Lima, Ohio) and her sister, Corinne O’Brien (late of Milwaukee, Wisconsin).

A family celebration of her life will be held in Hillsboro.  Interment will be in Saint Charles Cemetery, Hillsboro, at 10:00 am on June 25, 2020. In lieu of flowers, donations may be made to Concord Regional Visiting Nurses Association, https://www.crvna.org. Notes of condolence may be sent to Box 246, Hillsboro, New Hampshire.