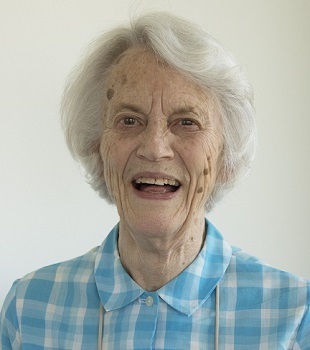 ANTRIM, NH:  Martha May Martin died peacefully in her sleep in the morning of July 2nd, 2020 in Peterborough, NH, at the age 92.

She was born September 19, 1927, in Humboldt, KA, to Charles and Isabelle McEwen (Miller). Martha's mother Isabelle, died of tuberculosis in 1932 and Martha and her siblings, Elizabeth and Lewis, all under the age of 6, were raised by her paternal grandmother, Oscie McEwen (Harwood) at her home in Humboldt.  Losing her Mom and the Miller family farm in Iowa, wearing wet cloths over her face during the dustbowl, and the long depression did not harm Martha, but rather helped build her character - she came out of childhood with her signature helpful, cheerful, grateful-for-what-she-has, personality, as well as having skipped right over first grade, with some help from her cousin, Vivian (Harwood) Hastings!

During the depression, her Dad looked for work between Stillwater, Oklahoma City and Cushing, OK - they did move a lot! Martha spent her junior and senior high school years in Cushing, culminating in her selection as the Valedictorian of the Cushing High School Class of 1944. While at Cushing High she met her future husband, Charles E. Martin.

After high school Martha moved back with her father and siblings in Oklahoma City where she attended a year at Oklahoma City College. She and Charles were married while he was home for final leave from the U.S. Navy before serving in the Philippines at the end of the War. Their wedding took place on August 26, 1945 at Charles’s dad’s house, "the house that babies built" in Cushing.

After the War, the couple used the GI Bill to attend Oklahoma Agricultural and Mechanical School (now Oklahoma State University) and were blessed with their first child, Ruth Ann, in June of 1947. Martha’s sister Betty also attended OSU beginning in 1947, and provided tremendous child care support as they both attended classes. Martha graduated with a BS in Biology, specializing in microbiology.

After college, Martha and Charles moved to Tulsa, OK to look for work.  Their sons, Charles Emmett (1950), Robert Louis (1954), and John Edward (1956) were born while the family lived there.

Charles found work in New England in 1957, so Martha bravely packed up the four children under the age of ten and they moved to 135 Union St, Natick, MA. While in Natick, Martha and Charles became fast friends with the Ames family, Mary Ellen and George, and their three sons, Lawrence, Robert, and Mark, sharing gardening, ski trips to Francestown, NH, international travel, and a lifelong friendship. In addition, Martha was a member of the Eliot Memorial Congregational Church in South Natick, singing in the choir, for 30 years.

Martha volunteered in elementary school libraries in Natick briefly and was inspired to further her education and attended Boston University, obtaining an MS in Education, specializing in Library Sciences. Her internships had taken her to elementary and middle schools throughout Natick, and upon graduating she secured a job at Natick (MA) High School in the Instructional Materials Center where she worked as a librarian and taught Library Sciences for over 20 years, retiring as Head Librarian in 1992. Martha loved her times at Natick high school, where she could also keep an eye on her and the Ames’ teenage boys, much to the boys’ dismay!

Martha was adventurous, taking trips with family to visit relatives and to see National Parks, and with Mary Ellen to Denmark and Italy, but also traveling alone to Tonga in the South Pacific for the wedding of her son, Robert, and his bride, Lolohea, with visits to friends in New Zealand and Australia. Later, those two and Martha and Charles returned to Tonga for a visit!

When ready to retire, Martha and Charles looked for the perfect site near the familiar territory of Francestown, and found it in Antrim, beginning construction on their passive solar retirement home in 1989. They stayed around the corner at the Martha Brown Cottages while they worked with Bob and Larry Ames until the Fall of 1992 to complete construction. Not to sit idly, Martha dipped every shingle by hand, and they are all still have their original stain! The house had ample room to accommodate of friends and family that visited from all over the country.

Their home near the North Branch River was as auspicious a location as the prior in Natick had been, Martha and Charles made fast friends with many other members of the community, especially Betty Avery from Liberty Farm Rd. Martha and Betty Avery were members of thee Smith Congregational Church and its Woman’s Group, the Deboras in Hillsborough, NH.  Martha worked in Reading Readiness with the Antrim Schools, started the Strong Living Exercise group that still meets today at the Grapevine, and they took a month long tour of Turkey together! Pamela Veenstra and Dwight Hyde were also frequent friends for breakfast at Common Place Eatery and a few other adventures.

Martha kept in frequent contact with their families and friends from Oklahoma and around the country using her gift of remembering names, faces and the names of her friend's children and even grandchildren's friend’s names, She kept in touch with her graduating classes from high school and college, attending many reunions in Oklahoma over the years. We think she may have saved every card, letter and photo she ever received, which went along with her activities as a family historian, doing a lot of family genealogical research and charting both the McEwen and Martin Family Trees.

Martha lost her dear Charles at the end of 2012, after 67 years of marriage. Their home was filled with various books, magazines and other artifacts of their long and happy marriage. As Martha's memory was failing her a bit, writing everything down on the calendars became very important and she did well with it for many years.  Their lives were well documented, with lots of memorabilia from trips and family mementos.

Her youngest son, John and his wife, Jan, became Martha’s companions and caregivers, moving in with her in 2013. Ruth and Bob provided much help in 2013, and eventually a team of caregivers was also brought on board, including dear friends, Pamela Veenstra, Joan O’Connor, and Lois Johnson as well as Dr. Suzanne Coble, Martha’s long-time friend and primary care physician.

In Martha’s later years she enjoyed visits and holiday meals with family in her own home or in Ruth and Jerry’s home in Newtonville. She was a frequent visitor to Jan and John’s home in Warren, RI. where her grandson Zane gave up his room and Isaac was always happy to have his grandma there. It was wonderful to have our Rhode Island friends in the neighborhood meet her and remember her fondly. She also spent the winter of 2018-2019 in Simi Valley with able assistance from Bob, Lolohea and her grandson Andelib. As throughout her life, Martha liked to be useful, weeding the garden, raking leaves, chopping vegetables, folding laundry and even when she could no longer cook, happily doing the dishes.

Back in Antrim, she continued with her Strong Living Program right up until October, 2019, thanks to the care of that wonderful group! She began to rely intermittently on Summerhill Assisted Living, in Peterborough, NH for respite care for John and Jan. The staff there were wonderful and provided her with safe, loving care. In October of 2019 Martha became so frail and the stairs to the house in Antrim so high, that she needed to move to Summerhill full time. As they already knew Martha from prior visits, her transition was eased. Hospice care began at that time as well.

She also leaves behind her siblings, Betty McEwen McCullough of Seattle, Washington and Lewis McEwen of Texas, plus many, many nieces and nephews.

Martha was a true friend, striving to be kind, caring, and always supportive of her loved ones. In addition to her family and many friends, she loved children, reading, words, ideas, music, science, and nature. In furtherance of those causes, she was a member of the DAR, the AAUW, and the PEO. She was a very gracious lady, very grateful for the care we all gave her right up until the end of her life.

We are better for having had her in our lives, and our memories of her will better us still more.

A Memorial Service will be held at her home in Antrim, NH, on July 25th, 2020 at 1:30 pm, invitation only due to Covid-19 restrictions. Some manner of livestream of the service will be available.  Please email JohnMinRI@cox.net to receive the link to the livestream or a recording of it after the event. In lieu of flowers, please make a donation to your local library.

The video of her Memorial Service is on Youtube, https://youtu.be/PIYXvogoRgU.