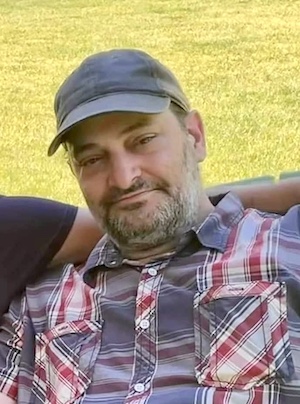 HILLSBORO, NH:  It is with great sadness that we share the news of Johnny’s passing Monday January 9, 2023.  While we are shocked by his death, we are thankful for the time he spent with us.

Johnny was born in Haverhill, MA, on August 19, 1981 to Nancy and John Theos.  In true Leo fashion, he was loyal, protective of his family and big-hearted.  There wasn’t anything he wouldn’t do for those he loved and you knew that you were loved because he said it often. His memory will be cherished by his parents, his three sisters, Jennifer Kachoris, Lisa Mazzola and Stephanie DiBurro, and many loving aunts, nieces, nephews, cousins and friends.

From the very beginning, he was a smart, active toddler.  He would get up to watch TV in the middle of the night and after being sent back to bed the second time, he learned that he just needed to turn off the tv volume.  Of course the light still woke up his mom and she’d come out to find him sitting in the recliner, grinning from ear to ear.  That grin stayed with him even when, as a teen, he got caught having snuck out of the house. The giveaway was being sprayed by a skunk and trying to hide it by dowsing his clothes in cologne.  The house smelled like it was on fire.

An animal lover, he grew up quite literally “horsing around”, with his feisty pony Cinnamon.  Weekends at the barn were spent grooming, mucking stalls, riding in the paddock and wooded trails and parachuting out of the hay loft window, you know the usual barn shenanigans.  This led him to his favorite work as a stable hand at a farm in Amesbury, MA where he worked for several years.  He adored his cat, Katherine and playfully teasing his mom’s dog Lucy.

He earned his black belt in karate and enjoyed performing on stage at belt promotions.  He also enjoyed attending fairs, backyard bonfires and amusement rides. He collected antiques and treasured keepsakes from his family.

He was proud of his Greek heritage and having had a chance to visit Greece with our family, you never would’ve known he wasn’t a local.  He fit in with Greek culture, he liked being called Yanni, he ordered himself a beer with his burger (since the drinking age was 16), discovered nude beaches with an underwater camera no less and was almost married off to a pizza owner’s daughter.

Johnny considered himself an “old soul”. He had a curious mind, a laugh that couldn’t help but make you smile, a new movie recommendation at all times and a love of history. He always felt that there was another time and place that would suit him better. We hope he has found that place and the peace he needed.

He loved all genres of music, especially “oldies” like “Against the Wind” for one.  If you get a chance to listen to this song, please do so with Johnny in mind.  The family would appreciate it if you would share memories and photos of Johnny as this would provide comfort as we find our way without him. A Celebration of Johnny’s Life will be set for a later date.

Starry, Starry Night Johnny. This world was never meant for one as beautiful as you. You’ll forever be missed.

If you or someone you know is struggling with depression, please talk to someone. There is always hope and help.  The Suicide and Crisis Lifeline is available 24/7 by dialing 988 or 800-273-8255.