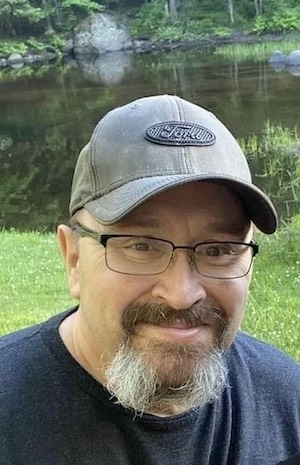 Rob was born in Peterborough, NH on May 9, 1960 to the late Frederick C. and Alice O. (Normandin) Kulbacki.

Rob worked as a mechanic for Sylvania in Hillsboro, NH before retiring from Sturm Ruger & Company in Newport, NH in 2021.

Rob was known for his big heart. He was loving, caring and would do anything for those he loved. He was an amazing father, grandfather, brother, son and friend. He was a hard worker and always liked to keep busy. He loved to build things, especially when it came to his motorcycle. He had so many ideas and was so creative. His smile and laughter were contagious even if his jokes were cheesy. He always had such an amazing outlook on life no what matter was thrown at him.

He really enjoyed being outdoors. He loved kayaking and camping with his best friend Dee Lyons, going for rides on his motorcycle and fishing with his grandchildren. He enjoyed his firearms, hunting and sitting around a fire with his friends and family. He enjoyed helping his son and daughter-in-law with maple sugaring. He loved taking his grandchildren to the park and watching them play. As long as he was surrounded by family, especially his grandchildren, he was happy and always had a smile on his face.

He is also known for being a member of the Deering Fire Department and being a part of the American Legion Post 59.

The Holt-Woodbury Funeral Home & Cremation Service in Hillsboro, NH is assisting the family.

A burial will be held in the Spring in St. Mary’s Cemetery in Hillsboro, NH.