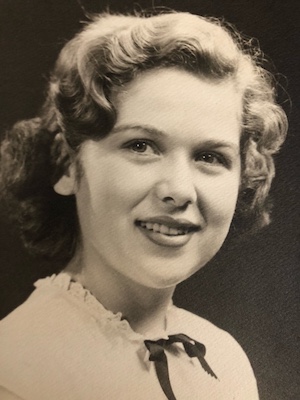 WARNER, NH:  Nancy Jean Nieder, 87, has gone home to be in the loving arms of her Lord and Savior.  She died peacefully in her sleep on January 1, 2021, in Warner, NH.

Nancy was born on July 29, 1933, in Newark, NJ, to William and Mildred (née Ellett) Trube.  Intelligent and strong-willed, Nancy succeeded at everything she put her mind to.  While studying Journalism at Douglass College, she met Richard Nieder.  They were married in July of 1953.  After spending the first years of their marriage in Texas, where Richard was stationed during the Korean War, the two purchased a dairy farm in Layton, NJ.  They raised their four children in Harding Township and, later, Bridgewater, NJ.  Nancy studied to become a Nurse at Raritan Valley Community College through Somerset County Vo-Tech’s Academy for Health and Medical Sciences and earned the highest marks ever recorded at the school.  When she wasn’t working, Nancy enjoyed cooking, gardening, painting, volunteering, and spending time with her family, especially camping vacations along the east coast.

It was on some of these vacations that Nancy and Richard fell in love with New Hampshire and decided to buy Twin Ridge Farm in Warner, NH, in 1980.  There, they tended gardens and raised horses, goats, pigs, and chickens while Nancy employed her culinary and artistic talents in a thriving herb blend and homemade soap business for which she traveled to numerous arts and craft fairs all over New England.  Nancy and daughter, Jerilyn, built Twin Ridge Farm into the successful horse dressage teaching and boarding facility that it is today.

Nancy’s love of the Lord and His people led her to be a benefactor to those in need in parts of Africa.  She helped found The Ubumwe Basket Project in Kigali, Rwanda, and Rest for the Nations Ministries, Inc. of Concord, NH, which supported this worker-owned basket-weaving co-op as well as a sewing ministry for producing children’s school uniforms.  The love she shared there in Kigali was so well appreciated that they named a primary school “Nancy’s Nursery” in her honor.  Nancy deeply wanted to help the children and women of Africa who were left destitute by the genocides.  She would appreciate your donation to the Dorcas Society Ministry (see below.)

She was passionate about sharing God’s Word with her friends and neighbors and led many Bible studies from her home.  Nancy had a nimble mind and tore through books and crossword puzzles with vigor. She loved journaling and writing poetry.  Cooking was also a great joy for her and large family meals were her delight.  She was an ardent fan of the Red Sox and the New England Patriots and would often be seen wearing their jerseys while she cheered them on.

Nancy is survived by her beloved husband of 67 years, Richard, her four children and their spouses, Christine and Robert Short, Katherine (Vicki) and Wayne Linkletter, Dana (née Chamberlain) and William (Chuck) Nieder, and Jerilyn and Kenneth Wood, her seven grandchildren and spouses, Hannah and AJ Burns, George Nieder, Mildred and Travis Patterson, Grace and Nicholas Guy, Trube and Caamon Brunk, Margaret Nieder, and Nancy (Elsa) Nieder, and great-granddaughter, Nora Patterson.  She also leaves behind her sister and brother-in-law, Joanne and Roger Winner, as well as niece, nephew and spouse and great-nieces, Sandra, Darrell, Rebecca, Megan, and Emily Winner.