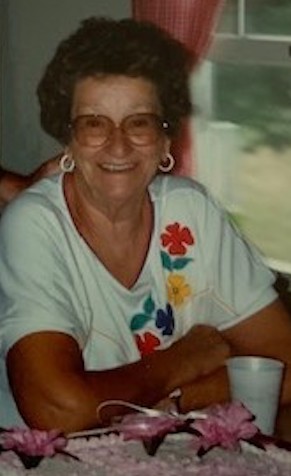 Eleanor was born July 22, 1919 to Harold and Cora (Rogers) Whipple, in a farmhouse in Ledyard, CT.

She graduated from Stonington High.  She worked at the Home Hospital where she met her husband to be Clayton E. Blair.  They were married in June of 1941 and a few years later bought the farmhouse she was born in.  Eleanor had part time jobs while her three children were young.  She later worked for Sears Roebuck for 25 years.  Her husband passed in 1968.  Eleanor joined a square dance and round dance group in her early 50’s and didn’t stop dancing until she was 75 years old.  She met her second husband, Robert Finlayson, while square dancing.  They were married in July of 1972 and divorced 12 years later.  Eleanor was active in the local Grange and always enjoyed going to church on Sundays.

She enjoyed various hobbies including raising house plants, gardening, sewing, knitting, along with numerous creative projects.  At one time she had over 100 African violets.  She was a wonderful cook and made delicious homemade bread. Eleanor was always trying new things.  She traveled to different countries and many of the states.  Eleanor like to play scrabble, card games, word scrambles, and doing cross word puzzles.  Her favorite TV shows were Jeopardy and Wheel of Fortune.  Eleanor was always ready to go to yard sales and auctions.  For close to 20 years she lived in Hillsboro, NH in the summer and Hernando, FL in the winter with her partner of 30 years, John Hollis, who predeceased her by just 2 months.  She loved spending time with her grandchildren.

A Service will be held at the convenience of the family.