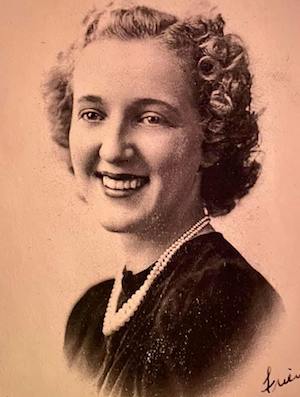 ENFIELD, CT & WASHINGTON, NH:  Alice Szczepanek Wiezalis, was born on December 29, 1921 and died on January 24, 2021, at the age of 99 years and 28 days..  She tried to match her 1st Cousin Jenny’s achievement of reaching 100 years, but alas, life just became too much for her tired ancient body.  A Few days before she passed, Alice told Melissa “I want to go to heaven.” Around the same time, Bubba, the big orange tabby cat, came to visit her room, laying with her, sleeping on her pillow for hours… which he never did before.  Working in nursing homes for many years, Melissa, often witnessed this phenomenon, as most facilities have a cat or two roaming freely through the halls.  Perhaps you have heard of the uncanny ability of cats, oftentimes, a visit was the warning sign, that the end was near. Her oxygen dropped drastically her heart was in a-fib, and she slept a lot.  On Saturday morning, she rallied a bit and enjoyed her favorite meal of the day, a  breakfast of eggs and bacon, toast and coffee, this would be her last.  Alice slept fitfully throughout the day, but in the warmth of the fireplace passed quietly just before dawn.

As the world suffers through this pandemic, I wonder if anything good has come from Covid-19?  I sincerely feel that if we didn’t have this sickness raging in the nursing homes, Alice would never have agreed to move to New Hampshire, whatever the circumstances!  A lifetime resident of Enfield, Connecticut, she spent the last three months of her life in Washington, New Hampshire, in the loving care of granddaughter, Melissa Leizure Anwar, her husband, Jeffri, their children:  Ali, Dylan, Dahlia and Anderson.  Just a few miles down the road, lived her daughter Marcia and husband, Larry Leizure. 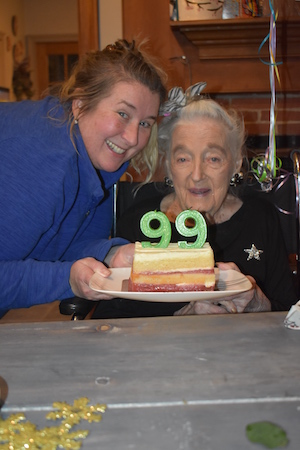 Ever since her week in the hospital last June, and four months of rehab at Suffield house, Alice was not improving, but withering away.  When she came to the facility, the Covid-19 pandemic was in full bloom and we were restricted to one 30-minute visit a week, out in the parking lot.  “In room visits” consisted of looking in her window and calling her on the phone.  I’m not sure if she ever figured out who was the peeping Tom, or which end of the phone to talk into!  These precautions may have postponed Covid from invading the facility, but in the fall, several residents and staff tested positive.  At that point, our family agreed that Alice was no longer safe at Suffield House and other arrangements must be made.  Melissa and Jeffri, both health care workers, had always extended an invitation to their grandmother, to live with them.  Melissa decided to quit her job to be the full-time caregiver for Alice and on November 8th, Alice left her beloved Enfield and found her sanctuary in the little town of Washington, NH.

Surrounded by the lovely things that were carefully selected from her home, her grand bedroom was transformed into Alice’s Wonderland.  The iconic portraits of Alice and Charlie hung over the mantle, familiar photos of family and friends reinforced the idea that this was now HOME.  Natasha, her Himalayan cat made the trip, once again united with her mommy. Oftentimes, in late afternoon, Alice would become agitated and was ready to go back to her “real home”.  As a diversion, 4:30 pm became Happy Hour, her favorite, potato chips and beer, family gatherings for a social hour.  Alice, after 99 years of hating cheese, developed a passion for sharp cheddar!  She found pleasure in Dove dark chocolate, five pieces at a time!  The house was always full of laughter, people and music.  She began to relax and enjoy the activities around her. One night, Jeffri was singing Karaoke, using a hand-held microphone called the “Magic Sing.” Alice’s face was radiant, as she smiled in recognition of some old forgotten songs.  Jeffri won her heart with Willie Nelson’s “You’re Always On My Mind” and soon they became a duet, with Alice singing along, remembering most of the words!  For all of us, Alice had returned home from a long trip away.

Great-grandchildren, Dahlia and Andy, with Covid enforced remote learning, were working on school projects from home.  Alice shared stories of growing up during the Great Depression,  walking the old iron bridge across the Connecticut River, to get milk at Bielonko’s Farm and getting a Christmas stocking containing only an orange and one dime!  She told of sitting on the steps of 10 Thompson Court, where every night was a neighborhood party and 10 cents bought a bag of potato chips to share.  They struggled, lived simply, valued everything they had, wasted nothing and their strong faith carried them through.  Alice was the 3rd of four children.  She was predeceased by Ted the first, Wanda the second and Irene the fourth children born to Stefania Siakala and Peter Szczepanek.  They lived in Chicopee, MA, then moved back to Thompsonville, to work in Bigelow Carpet Mills.

Casimir E. (Charlie) Wiezalis danced into Alice’s life just as WWII was accelerating.  Back in those days, there were frequent dances in the area with live bands, and Alice loved nothing better than to get dressed up and party.  It was at a weekly dance at the Polish Home in Hartford, when she first laid eyes on Charlie, up in the balcony, looking like Clark Gable, dark and handsome.  He crossed the floor, asking HER, out of all the girls, to dance, and at that moment Alice found her future husband.  Charlie has been gone for 27 years, and Alice still yearned for him until her dying day, for there was no other man could compare.

Alice and Charlie were on their way to Hartford, to announce their engagement to the family.  It was December 7, 1941, and the announcement came across the radio that the Japanese had bombed Pearl Harbor and the US would join the fighting in WWII.  Everyone advised the young lovers to not get married, but the young and stubborn Alice would marry Charlie despite the world falling around them.  No one knew what the future would bring.  She kept busy, she had three jobs during the war, she lived in the moment, and went to church every day.  She could not waste time worrying about tomorrow she was too busy!  Baby Carl, a beautiful healthy boy, was born when Charlie was in North Africa.  Alice was offered a job in Bigelow, the carpet looms had been retrofitted for the war effort and the plant manager begged Alice to work third shift weaving blankets.  She tried out the job for a week, thinking she could change jobs and if the cold, damp, and dirty conditions were intolerable.  Quitting was not an option when she saw that in her pay envelope was twice as much money as the office job would have paid!  And, after three years, the war was over, and Charlie returned to his adoring young family.

Post war USA was booming, vets needed jobs, families needed housing and to get on with the rest of their lives.  During Charlie’s absence, Alice saved the astronomical sum of $5,000, enough to open “Charlie’s Neighborhood Grocery.”   With the success of his business, Alice soon had dreams of owning her own home one day.  By 1954, there were three kids: Carl, Alicia and Marcia, and the dream house on Mathewson Ave was ready for the family, the “West Wing” for Babcci and Dzzia and the rest for Alice, Charlie and the he roomy new house needed many things, but Alice especially wanted a cherry dining room set.  This was significant, because that dining room set changed Alice’s life forever.

Around the time that the house was being built, Hallmark Cards, an up-start company based in Kansas City, MO was expanding eastward – and was desperate for help, no experience necessary.  Alice applied and got that job, knowing that Charlie would not be happy with the prospect of his wife leaving the family and going to work.  She promised to quit, after she finished paying for the dining room set.  The only problem was that she loved that job, loved her boss, loved the girls, that would become lifelong friends, and the bit of extra income for the family was a blessing.  Charlie was not happy, after all his sisters didn’t work … YET!  Alice was one of the first housewives who traded in her apron for a business suit, leading the way for today’s 2-income households and the end of fresh-baked cookies for after school snack!  Alice was impossible to say no to, and that seasonal job lasted almost forty years.  Her association with Hallmark was instrumental in bringing about some of the highlights of their lives together as the company expanded over the years, and Alice blossomed as well.  From accountant, to the Executive Secretary to the plant manager she earned the Associate Degree required for the job at age 65!  For Alice, nothing was impossible!   She often said, “I’ve had a wonderful life… I wouldn’t change a thing!”  How many of us could say that?

Up until her 98th birthday, Alice lived alone, with a little bit of help from her friends and family;  Alicia, taking care of a million little and big things;  Peter, next door, could fix anything inside and out, David, her son by another mother, and so many friends who always came by with love and support.  This good fortune, Alice attributed to her guardian angel, Mother Mary, she looks after us and can never say no to any request.

Because of the pandemic, this was the best place for GG Alice to spend her final months on this earth.   However, in retrospect, this would have been the best place for Alice to be, even without Covid 19!  Our family is so grateful to the wonderful staff at Bayada Hospice and Home Services for their support and guidance in assisting Melissa during this difficult time.  The support staff was available 24/7 to offer advice when Melissa had a crisis, no matter how large or small.  They offered encouragement, assuring her that the care and love she provided was the best thing in the world for Alice.   We would heartedly recommend, that if you are responsible for providing end of life care for a loved one, if possible, bring them home.  It will be the hardest job you will ever love.  The Hospice care provides whatever is needed to provide safe and compassionate support for your loved one, and you will be left with wonderful memories to carry in your heart forever.  Alice was our family’s last surviving member of the “Greatest Generation” and has finally joined her beloved Charlie, together again, “Shall we Dance!”

In memory of Alice S. Wiezalis, a tax-deductible donation may be made to: Bayada Foundation - Hospice Fund, 194 Pleasant St., Concord, NH  03301.

The Holt-Woodbury Funeral Home and Cremation Service, Hillsboro, NH is assisting the family.