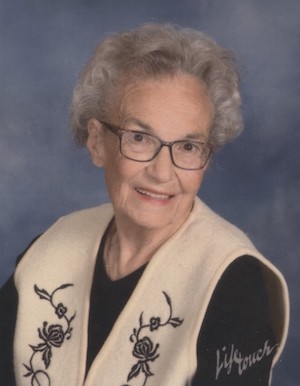 Pauline was born in Lowell, Massachusetts on April 13, 1924 to John A. and Pamela (Champagne) Clement.

She attended Lowell schools and graduated from Lowell High School in 1941. She married Francis Beard in 1945, when he returned from the Navy, after serving in the South Pacific. They settled in Hillsboro and raised a family, which was the most important part of her life.

She was a communicant of St. Mary’s Church in Hillsboro and a long time member of the choir.  She was an avid reader and was an accomplished seamstress and knitter. She enjoyed various types of crafts which she gifted to family and friends. She loved the outdoors.  Pauline and her husband spent much time camping, hiking and mountain climbing, often accompanied by the grandchildren. She retired from Bank of New Hampshire 1987 and continued doing part time work at Sweet Expressions in Hillsboro. She attended her first prom in her eighties and much to her surprise was voted prom Queen. In June of 2021, she was recognized as Hillsboro’s oldest resident at 97.

She leaves behind two brothers, James Clement of Elmendorf, Texas and David Clement of Conway, North Carolina, a sister, Betsy Clement of Lowell, Massachusetts and many nieces and nephews. She was predeceased by her husband, Francis and grandson, Shane in 2006, great-grandson, Ricky III, three sisters, Theresa, Doris and Eleanor and three brothers, Roger Maurice, and Paul.

Burial will be in the Spring in Maple Ave Cemetery, Hillsboro, NH.

In lieu of flowers donations may be made in Pauline’s name to the Hillsboro Food Pantry, 107 Windsor Rd, Hillsboro, NH 03244.