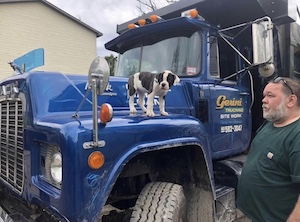 Scott was born on March 27, 1959 in Concord, NH, the first child of Ruth (Murdough) and Ennio W. Gerini of Hillsboro, NH.  Scott spent many summers during his childhood at his family’s camp on Island Pond in Washington, NH.  In his younger days, he won many trophies from local demolition derbies and was a member of the Hillsboro Fire Department.  When he wasn’t working, Scott spent lots of time at Dick Kemp’s shop, snowmobiling, and four wheeling in his blue Jeep.

Scott spent time working for Wyman’s Chevrolet, the Hillsboro Town Highway Department, and Henniker Redimix when he was not self-employed.  Scott built his first garage in 1983 on Church Street in Hillsboro, where he ran Scott’s Auto Body for many years.   He worked on many people’s vehicles and was known as one of the best painters in the area. Scott’s daughter was born in 1983 and his family was completed by the birth of his son in 1985.  In 1985, Scott built a house on Old County Road in Deering, where he lived for the rest of his life.  In 1998, he built a larger garage at his house, where he continued to run Scott’s Auto Body for five more years.  Most recently, Scott owned and operated Gerini Trucking, building and working on his fleet of dump trucks and other equipment for site work and excavation.

Scott was a self-made man and a steadfast father, who worked hard his entire life to make sure his family never went without.  He is remembered as a man of few words by some, but others know him for his dry wit, playful sense of humor, strong will, and his knowledge of all things that drive.  He also had a love of dogs, junk yards, and Mack Trucks.  In more recent years, he enjoyed going to flea markets on Sundays, antique car and truck shows, and had a particular interest in local history and the way things were.

Scott is predeceased by his father, Ennio W. Gerini.  He leaves behind his mother, Ruth E. Gerini of Hillsboro; his woman of 38 years, Cheryl Powers, of Deering; his daughter, Jennifer Gerini-Zipper of Washington, his son Scott Gerini, Jr. of Deering, two grandchildren, Henry and Zoey Zipper of Washington, many aunts, uncles, and cousins and several nieces and nephews.

The family is planning a celebration of life at a later date, to be held at his garag