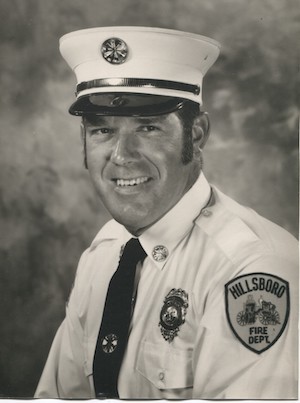 HILLSBORO, NH:  On Thursday, December 31, 2020, Eugene “Skippy” Edwards passed away at his home surrounded by his loving and devoted family.

He was born in Hillsboro on a snowy day on April 22, 1940, to his parents, George H. Edwards and Florence Murdough Edwards.  He was predeceased by his siblings, Virginia, Elsie, Leon, Chelas, Wayne, George, Robert and Orville, is survived by one brother, Allen Edwards of Deering.

He was an active member of his community. He worked for the Town of Hillsboro. as Water Commissioner for several years and was a Volunteer Fireman for the Hillsboro Fire Department for many years before retiring.  He worked for Curt Rowe, and it was there that he developed his passion for operating heavy equipment.  Ultimately, he turned that passion into 50 plus years of owning his business Eugene Edwards and Sons Excavations. He enjoyed Sunday drives in one of the many automobiles from his collection.  He made numerous trips north to snowmobile with friends and family and he loved going to the ocean for weekends away with his wife.  He left his mark here in Hillsboro where he will be remembered with fondness, respect and a whole lot of love.

He leaves behind his lovely wife, Patricia Edwards of 60 years, which was celebrated this past October. He is also survived by his daughter and son-in-law, Charlene and Michael Hardy, his son and daughter-in-law, Gary and Stephanie Edwards, his four grandchildren, Angelica Hardy, Brittany Hardy, Matthew Edwards and Austin Misiaszek and two great-grandchildren, Ariana Pendleton and Nolan James Misiaszek.