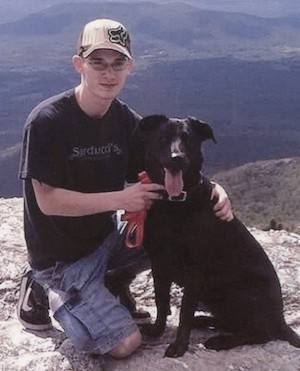 David was a kind, loving soul with a spirit for adventure. David could find the joy in every moment and occasion; more powerfully – he could share that joy and fun with everyone around him. He could turn the simplest of tasks into an adventure, the blandest of ingredients into a gourmet meal, and with a smile and a laugh he brought light into the darkest of days. He loved being outdoors, especially when he could be hunting, fishing, or hiking with his dog Molly. He was a great listener and was always willing to offer love and support any way he could whenever he saw that people were struggling.  He loved spending time with friends and family, especially when he could cook for them. Some of his favorite times were when he was able to cook for the family during holidays so that he could show off his kitchen skills with his stepfather, Kenny.

He spent most of his childhood in Fitzwilliam, NH, but moved south with his family and graduated from Demopolis High School in Alabama. He then attended the New England Culinary School in Montpelier, VT.  He moved back to New Hampshire when he finished and brought his love of cooking back home, settling in to a job working as a cook at Brady’s American Grill.

David is survived by his mother and stepfather, Jenny and Kenny Briggs; his father and stepmother, Sebastien and Jennifer Filion; his brother, Bryan Geddes Lozeau; his sister, Toni-Marie Geddes Lozeau; his half-brothers, Matthew and Brandon Hadley; his maternal grandmother, Ellie Geddes and Buz Frye; his paternal grandparents, Bill and Audrey Rhoades; his aunt and uncle, Daniel and Christine Geddes; his cousins, TC and Sydney Geddes; his best friends, Michael Governor and the entire Governor family, and Lauren Large; as well as many other family and friends. He was predeceased by his maternal grandfather, Armand “RIP” Lozeau in 2005.

In lieu of flowers, the family asks that donations are sent to the shelter that brought David and his beloved dog Molly together. Checks can be sent to Bigbee Humane Society, PO Box 474, Demopolis AL, 36732.
Express Your Condolences