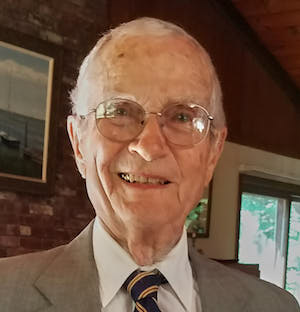 Born in Burlington, VT, he enjoyed spending many summers at his grandparents' farm in Chittenden, VT, before graduating from Rutland High School in 1946 and attending Brown University, where he graduated with honors in 1950.

Enlisting in the U.S. Army, he completed Officer Candidate School and served in Korea as an infantry platoon leader. After his Army service, Haven worked in Washington D.C. and earned his master's degree in Industrial and Labor Relations at George Washington University.

Haven joined Fieldcrest Mills Inc. in 1957 and retired as Corporate V.P. for Industrial Relations in 1985. After retiring from Fieldcrest, Haven moved to the Pamlico Sound area of NC and built his own boat, which he used in the Coast Guard Auxiliary.

In the early 90's he moved to Hillsborough, NH to join Ann Ford. They enjoyed hiking locally and made many trips across the country and around the world.

An avid reader, Haven served as trustee of the Fuller Public Library in Hillsborough several years. A golf enthusiast, he enjoyed meeting friends on weekday mornings at the Angus Lea Golf Course in Hillsborough.