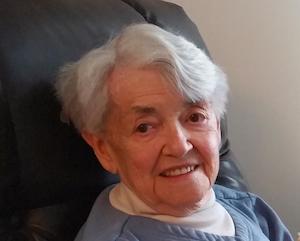 Janet was born on her family’s farm in Chichester, on May 20, 1930, the only child of Jacob Smith Sanborn and Gladys Millicent (Johnson) Sanborn.  She attended elementary school in Chichester, middle school in Norwood, MA and graduated in 1948 from Manchester Central High School.

After graduation Janet went to work for New England Telephone Company in the Payroll Dept.   Shortly thereafter, while visiting her mother at work, Janet met her future husband, Frank Wiggin Amadon.  The couple married at Grace Episcopal Church on August 30, 1952 and lived in Manchester where both Frank and Janet worked for NE Telephone Company. In the early 1960s they moved their growing family to Goffstown, but in 1965 a promotion for Frank had the family moving to Claremont where they raised their two children, Frank Russell Amadon and Alicia Millicent Amadon.  Between 1977 and 1985 Janet and Frank made three moves including Hopkinton, NH, Yarmouth, ME, and Contoocook, NH.  Following Frank’s death in 2001, Janet moved to Holderness to be closer to family.

In 1964 Janet and Frank invested in a camp on Crystal Lake in Barton, Vermont, which became a much loved retreat for the entire family.  Janet and the kids spent summers at camp and Frank drove up on weekends.  Camp is still the place where the family gathers to enjoy time together and to venture into the tranquil landscape in Spring, Summer and Fall.

The family wishes to thank Forestview Manor for the care and support that both Janet and her family received over the past two years.

A private memorial service is being planned for this spring at the gravesite in Contoocook where Janet will join her husband.  Condolences maybe left at Holt Woodbury Funeral Homes website.

To honor Janet please consider making a contribution in her name to the Alzheimer’s Association MA/NH Chapter, 166 S. River Road #210, Bedford, NH 03110 or to the charity of your choice.