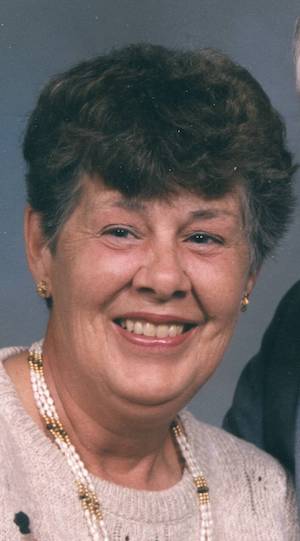 Beatrice was born in Antrim on April 22, 1930, the second of the five children of Oliver and Isabel Kidston Wallace.

As a girl, she played on her school basketball team and worked as a plane spotter during the war. She waitressed at Gregg Lake, dated twins and got into trouble for chewing gum during classes.

She attended New England Baptist Nursing School, where she worked hard and was fond of playing pranks.

After school she worked with Dr.Lahey, of which she was quite proud. She had some interesting adventures doing private duty nursing, including a proposal of marriage from the very wealthy Mr. Remington, which angered the housekeeper and got her fired. She loved telling this story!

In late 1955, this beautiful young woman met the love of her life, Robert Cusick, and within six months, they were married. They were together until Robert died in 2013, but he was never far from her thoughts.

Bea was a strong woman, and a woman of great spirit who told it like it was. She was a surrogate mother to many besides her own daughter Carol. She was kind, generous, and completely devoted to her family. She loved making her home a comforting place and her legendary Christmas Eve parties are remembered with great fondness. She was an extremely talented gardener and craftsperson; she loved keeping her hands busy. Late in her life, when her eyesight was going, she took up painting, and her works are treasured by those who received them.

She has gone to her beloved Bob and will be missed by many.

Calling hours will be held Tuesday, July 2, 2019 from 5 to 7 pm in the Holt-Woodbury Funeral Home & Cremation Service, Hillsboro, NH.

Funeral Services will be held Wednesday, July 3, 2019 at 10 am at St. Mary’s Church in Hillsboro, NH. Burial will be in the NH Veterans Cemetery in Boscawen at 2:30 pm.