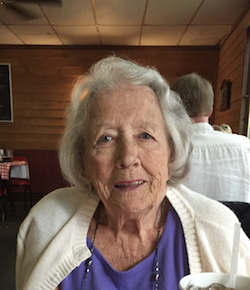 Pauline was born in Medford, Massachusetts on April 7, 1928, the daughter of the late Chester A. Wickens and Frances A. (Schneider) Wickens.  Pauline lived most of her life in Derry, NH. She is survived by her brothers, Chester A. Wickens, Jr and wife Betty of Franklin, NH, Donald Wickens of Hillsboro, NH, Robert Wickens and wife Linda of Polk City, Florida, and sisters, Alice True of Alton, NH and Carol Frederick and husband Charles of Chester, NH.

Pauline graduated from Medford High School in 1944.  After high school, she worked many jobs to pay for flying lessons and to purchase an airplane with a group of fellow enthusiasts.  She earned her pilot’s license at age 17.   Pauline moved to Derry NH in 1947, and worked as a Legal Secretary for Judge Herbert Grinnell.  She then joined the Air Force during the Korean War as a Radio Operator at Keesler AFB in Mississippi.  After returning to Derry, she worked as an Office Manager for Public Service of NH at their Derry office.

Upon her marriage to Richard MacGregor, she became a stay-at-home mother.  She was a very dedicated mother, enriching her childrens’ lives with activities in sports, Scouts, and music lessons.  She also lived many summers off-the-grid with her children and husband at their camp in the White Mountains during their formative years, giving them amazing life experiences with nature.  Pauline loved wintering at Senate Manor in Port Richey, FL with her husband. She was very active in many groups there, including the Woman’s Club, Chorus, Craft Group, Shuffleboard Teams, and also helping to organize many park activities. She also loved playing cards, taking trips to the beach, and sitting in the sun.  Most of all, she loved spending time with family and eating out together.

Pauline was predeceased by her husband, Richard E. MacGregor, in 2014.  She is survived by her children, Bret MacGregor of Derry, sons, Cody and Tyler; Jill Flanders and her husband, John of Weare, sons, Ben, Theo and Jack;  Scot MacGregor and his wife, Cherie of Danbury; and, Donna MacGregor of Lexington MA, daughters, Lee, Heather, Gretchen and Heidi. Her surviving family also includes many nieces and nephews.

A graveside service will be held on Saturday April 20, 2019 at 11 am in Forest Hill Cemetery in East Derry, NH.

In lieu of flowers, please make memorial donations to your local Meals on Wheels Charity.