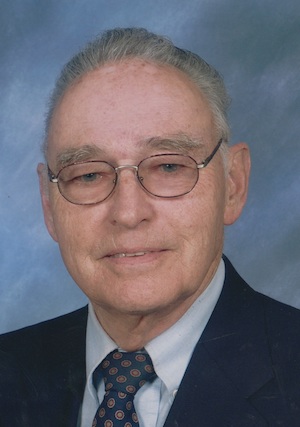 HENNIKER, NH:   Vernon A. Knowlton, 89, passed away peacefully after a brief illness at New London Hospital on Thursday, August 29, 2019. He was born October 20, 1929 in Keene, New Hampshire, the second of three sons born to Wilfred and Eva (Taylor) Knowlton.

Vernon attended and graduated from Jaffrey, NH schools, Class of 1947. After graduation he married his high school sweetheart, Bertha Leel, of nearby New Ipswich. Soon thereafter he enlisted in the U.S. Air Force where he was involved with engineering activities while stationed in Iceland, an experience that had significant impact on his future career.  After serving his country, he moved his family to Henniker and attended New England College. He graduated with a Degree in Civil Engineering, led to a 31-year career as the Chief Engineer of the New Hampshire Water Resources Board, where he was responsible for managing lakes, ponds, rivers and dams throughout the State of New Hampshire.  He took great pride in managing the water resources and dams across the State and was known as an accomplished engineer across North America.

In addition to his parents, Vernon was also predeceased by his brothers, Donald and Phillip, and he lost his first wife Bertha, to a long and difficult illness in 1971.

In 1973, Vernon remarried, to Jean Fuller of Contoocook and this June they celebrated 46 wonderful years of marriage. Vern and Jean were able to take an early retirement and spent many beautiful summers at the family camp on Lake Sunapee. But, they also made time to enjoy some opportunities to travel throughout our country and enjoyed many trips abroad, especially traveling to many European countries.  When the temperature cooled off they would visit the Islands and usually spend a few months each winter at Sanibel Island, Florida.

In addition to being an avid Patriots fan Vern, also loved the outdoors and enjoyed fishing, hunting, and boating. In the Winter, Vern and Jean could be found skiing at nearby Mt Sunapee Ski area.

Vernon is survived by his loving wife, Jean, his son, Alan, of Hampden, Maine, a grandson, Andrew and his wife Cynthia along with two great-grandsons, Braden and Anthony, of Celina, Texas, and many nieces and nephews.

Interment will follow the service at Henniker Cemetery. A reception will be held at St. Theresa’s Parish hall to conclude the services.