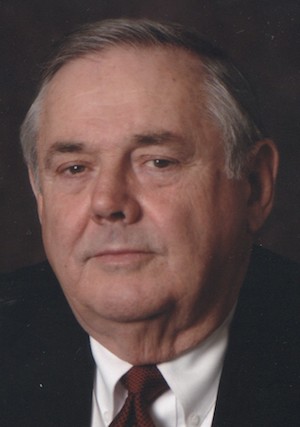 Robert was born January 7, 1935 in Goffstown, NH, to Russell B. and Geneva {Stafford] Flanders.  He spent his youth in Weare, NH where he “Walked a mile to the one room school in his rubber boots, uphill both ways!” Later he moved to Henniker where he graduated from high school and attended NEC. In 1958, he enlisted in the U.S. Army and spent the next three years in the Military Police, stationed in Grafenwohr, Germany.

Following discharge, he began a long career in the insurance industry, retiring in 2000, as Assistant Vice President of Workers Compensation for AIG. Always committed to community service, he served Antrim as a member of the Police Department, Board of Selectmen and Contoocook Valley School Board. Elected Moderator in 1971, he held that office for 41 years. Immediately following retirement, he was elected to the New Hampshire Senate from District 7 where he represented constituents for three terms.  He was instrumental in formulating and organizing the Antrim-Bennington Lion’s Club and Antrim Historical Society.  He was Charter President of both organizations and has been a member of the Maplewood Cemetery Board for many years.

At the time of his death he was a sitting member of the NH Adult Parole Board and the Judicial Conduct Board, having been appointed to both by the governor.

He is survived by his wife, Alycemae, and daughter, Debra, both of Antrim, his brother, Bruce (Deborah) of Dardanelle, AK, his sister-in-law, Nancy (Dennis) Tewksbury of Sebring, FL, several nieces, nephews and cousins and his beloved boxer Bube.

A celebration of his life will be held on Saturday, September 7, 2019 at 2:00 pm at the First Presbyterian Church where he has been a member for over 60 years.

In lieu of flowers, those who wish may donate to First Presbyterian Church, 73 Main St, Antrim, NH, or a charity of their choice