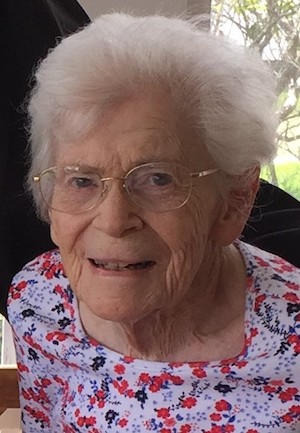 She was born on February 20, 1930 in Portland, ME and was the daughter of the late Edward and Lula (Conary) Nelson.

She graduated from Mass Eye & Ear Infirmary Nursing School in 1952 as an RN and then attended Boston University where she took classes to teach nursing. She taught at Mass Eye & Ear and eventually worked as an RN throughout her career and retired from The Presidential Oaks Nursing Home, Concord, NH in 1990. Mom was involved with several ladies and church groups over the years. She loved reading, sewing, going on walks, spending time with husband, children, grandchildren.

In 1958, she met Philip C. Sullivan of South Portland, ME and they married on August 22, 1959. They resided and raised their family in Weare, NH until they retired to Swan’s Island, ME.

Visiting hours will be held on Saturday, August 24thfrom 10:00 to 11:00 am in St. Mary’s Catholic Church 38 Church Street Hillsboro, NH. Services will follow at 11 am.

In lieu of flowers, donations can be made to the American Heart Association, 2 Wall St #104, Manchester, NH 03101.