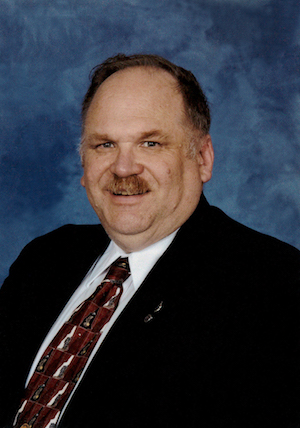 BOW, NH:  Kerry Richard Molin (68) of Bow, NH died unexpectedly on August 9, 2019.  He was born on July 28, 1951 in Waterbury, CT and was the son of the late Wilbur and Jean (Reichenbach) Molin.  The Molin Family moved to Peterborough, NH in 1964, then to Antrim, NH in 1970, and owned and ran the former Hillsboro business The Country Craftsmen, a woodworking factory, furniture store, and gift shop.

Kerry graduated in 1969 from Peterborough Consolidated School and attended Worchester Polytechnic Institute and Nathaniel Hawthorne College graduating with a degree in economics and business.  He worked for the State of New Hampshire Banking Commission until his retirement in 2010.

He was a dedicated member of the Boy Scouts for over 60 years and earned all ranks including the prestigious Eagle Scout Award.  Kerry was also elected to the Order of the Arrow and served on many committees throughout the years.  For his dedicated service, the Daniel Webster Council bestowed Kerry with the Silver Beaver Award in 1988, the Order of the Arrow presented him with the National Distinguished Service Award in 1990, and the Northeast Region of the Boy Scouts of America presented Kerry with the Silver Antelope Award in 2001.  In Scouting, as in life, Kerry was a servant leader and inspiration to work with.  He will be missed by the Scouting community across this Nation.

Kerry was also a member of the Masons and the Harmony Lodge for over 40 years, served as Tyler for 20, and was elected Treasurer this year.

Members of his family include his two sisters and their families, Claudia Molin Sysyn and Tim Sysyn of Hancock, NH and their daughter Natalya Sysyn and partner Tim Dowling of Denver, CO;  Hazel Molin and Charles Zerbinopoulos of Dover, NH and their daughter Jillian Zerbinopoulos, her husband James Gibbons and daughter Ren of Newfields , NH.  He is also survived by a step-nephew, Andrew Zerbinopoulos and his spouse Blake Burdett of Jacksonville, FL, along with an aunt and many cousins in CT, NY, VT, MA and FL.

A Memorial Service will be held on August 24, 2019 at 2 pm at the Masonic Lodge, 16 Gay St, Hillsboro, NH.  A private family burial will be in Antrim, NH at a later date.

In lieu of flowers, donations may be made to the Shriners Hospital, Boy Scouts of America - Daniel Webster Council, and the Grand Lodge of New Hampshire – F & AM.