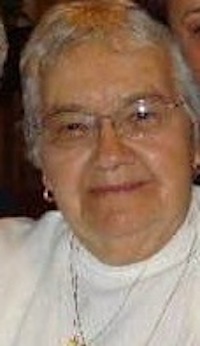 She was born on December 6, 1929 in Tyngsboro, MA to the late Arthur and Maria (Tardif) Cabana.

She was raised in Tyngsboro, MA until 1944, when her family moved to Peterborough, NH.

During high school she worked for the Peterborough Telephone Company.  She graduated from Peterborough High School in 1949.

To everyone that knew her, she was “Memea”, and was a fabulously strong, hardworking woman who raised her children to stand up for what they believed in.

She had a quick wit and a great sense of humor.  She loved her grandchildren, unconditionally.

She loved date nights and Sunday rides with her partner of 44 years, who predeceased her, Richard Kemp. She could often be seen painting on the old Mack Trucks, from Dicks collection.

She will be greatly missed.

She is survived by her daughters, Kandace Wafer and her husband Jim, Kristen Beals and her husband Grant, all of Eagle River, AK, Kelly Cabana D’Errico and her husband Bob of Hillsboro, NH, a son, Michael Flynn of Granite Falls, NC, her brother, Roger Cabana and his wife Allison of Peterborough, NH and her grandchildren, Stacy Colby, Christopher and Shayna Whitcomb, Tracy Colby, Jason Holmes and Deviroux D’Errico, her great-grandchildren, Karen Mitchell, Tyler Becthal and McKenzie Rockhill, and many nieces and nephews.