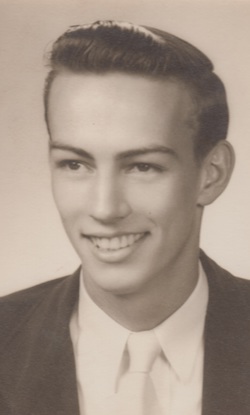 He was born in Newport NH December 19th 1938, the son of  Ero WIrta and Aune Antilla Goings. His siblings include Allen Wirta of Sunapee, NH and Mary Going McNab of Nova Scotia, both deceased, and Bruce Goings of Canaan NH.

He was raised in Sunapee, NH and graduated from Sunapee High School in 1956. Bob was married for 57 years to his childhood sweetheart, Joanne Gagnon, of Georges Mills.

He attended UNH and received his Master’s Degree from Keene State College.

Bob taught history, coached baseball and golf, and was the Athletic Director for 33 years at Hopkinton High School.

He was well known for his wit and humor, which added to his teaching style, and which his students loved and enjoyed.

He was an avid golfer and sports fan and he loved fishing and ice fishing.

Bob belonged to many organizations and clubs.

He spent 42 years at his summer cottage at Lake Todd in Newbury, NH as well as at the ocean cottage in Port Howe, Nova Scotia.

He was a loving husband, a wonderful father to his two daughters, Karen Wirta Coburn, of Hooksett, NH and Kristin Wirta, of Venice FL,  an awesome grandfather to his three granddaughters, Tahlia, Raelle and Lily and his great grandson, Ezra Eli, who was his fishing partner and buddy.

The Holt-Woodbury Funeral Home in Henniker in charge of arrangements.  There are no calling hours or service.

A Life Celebration at the Appleseed Restaurant, Bradford NH will take place Sunday, September 9th from 1:00-3:00. Light fare will be served and a eulogy delivered at 1:30 pm by HHS colleague and dear friend, Richard Brandt.  Please come and share treasured memories of Bob.