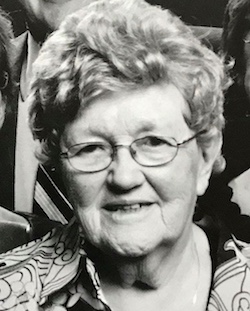 She graduated from Pinkerton Academy in Derry, NH, Class of 1941. Barbara was always civically active in her community and a strong advocate for education.

She was a life long learner and held degrees in nursing and accounting. She was a former Derry School Board member and worked for Derry Visiting Nurses. Later in life, she volunteered at the Henniker Historical Society and was a long time member of the Stratford Club of Concord, NH. Barbara was a passionate supporter of all things Democratic and was a devoted member at St. Theresa’s Catholic Church in Henniker, NH.

Barbara lived life to its fullest, with great passion for all of her interests and her family. She touched the lives of all who knew her, including her many friends and extended family. She was so proud of all three of her “boys” as anyone who knew her would say.

Barbara was predeceased by her husband Edward Gratton, parents Dora and Gail Weston, and her two brothers and their wives, Gail and Peg Weston and Carl and Marie Weston, and her beloved nephew, Alan Weston.

A pre-Mass gathering will be held Wednesday, September 19, 2018 from 10 am to 11am at St. Theresa’s Church in Henniker, NH, followed by a Mass at 11 am and a Celebration of Life in the church hall.  Burial will follow at Forest Hill in East Derry, NH.

In lieu of flowers, the family requests donations in her name to Pinkerton Academy Alumni Association, 5 Pinkerton St, Derry, NH 03038.

The Holt-Woodbury Funeral Home Henniker NH is assisting the family.