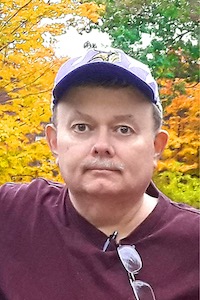 ANTRIM, NH:  Mark Francis Tibbetts, 57 of Hillsboro/Antrim NH, passed away peacefully on February 27, 2018 at his home in Antrim NH after a brief illness with cancer with his loving family around him.

Mark was born on July 25, 1960 IN Manchester NH. He graduated from Hillsboro-Deering High School, Class of 1978.

Mark was employed at IGA, Hillsboro NH, and later worked at Osram, Sylvania for 35 plus years.

Mark was a member Loyal Order of Moose Hillsboro, NH.

Mark was a sports fan; he enjoyed watching baseball, basketball, gootball and hockey.

Mark is preceded in death by his father, Earl D. Tibbetts and his brother, Michael E. Tibbetts.

The Funeral Service will be held at Holt-Woodbury Funeral Homes, Hillsboro, NH on March 17th, 2018. Calling Hours will be from 1 pm to 2pm.  Funeral Services immediately follows.

The family of Mark F. Tibbetts wishes to thank you and invite you to a luncheon at the Hillsboro Loyal Order of Moose immediately following the service.

In lieu of flowers, memorial donations may be given to the Antrim Police/Rescue Services.