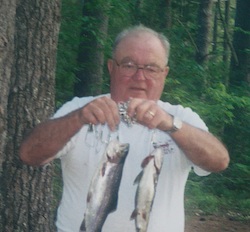 Bill was born on March 31, 1931 to Otto Dan and Hessie Otalie (Blanchard) Simpson in Washington, VT.  He attended schools in Washington and Barre. Bill served in the National Guard from November 1949 through November 1955.

He married Ann Susie Phillips on February 13, 1955. They settled in Contoocook and raised five children. From 1957 to 1994 Bill worked for Kearsarge Telephone Co. and Hopkinton Telephone Co. which later became Merrimack County Telecom. He started as a lineman and advanced in responsibilities by attending many schools as technology progressed. After retirement he became a consultant for the phone company and worked flagging for New England Traffic Control.  While working and raising a family Bill volunteered for the Hopkinton Fire Department as a fire fighter and EMT.

Bill was predeceased by his wife of sixty years, Ann, and his brother Richard.  He is survived by his five children William C. Simpson, Jr., Laura and Richard Marshall, Debra and Jim Walter, Sharon and Marc Russell, and Phyllis Shea.  He leaves his sister-in-laws, Lou Ann Phillips, Pandora Martel, Liz Westgate, and a brother-in-law Bud Phillips.  He was also loved by his ten grandchildren and nieces and nephews.