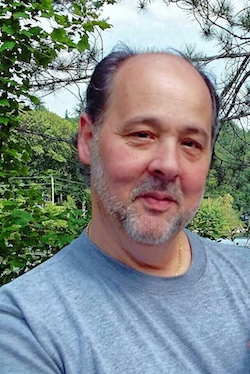 Robert is preceded by in death by his father, John Kennedy and brother, Stanley Ankiewicz.

Robert was born in Chelsea, MA and moved to Lynn, MA at a young age.  As a young adult he moved to New Hampshire where he met the love of his life, Lisa.  From the day they met, they were inseparable and truly enjoyed each other’s company. They moved to Hillsboro, NH where they married and raised their family.

Robert worked as a chef at Tooky Mills Pub in Hillsboro, NH for 19 years.  He took tremendous pride in his job and considered his coworkers to be family.

Robert was an extremely loving father and was so proud of his children and grandchildren.  Time spent with his family and friends is what he treasured most.  He especially loved spending time with his five grandchildren.  Second to family was sports.  He was the biggest fan of the New England Patriots, Boston Red Sox, Boston Bruins and the Boston Celtics.  When one of his teams won the big championship, everyone knew what Robert was doing at midnight, heading to Modell’s for his championship shirt and banner for Tooky's. He loved to just get away on the weekends and spend time with his family.  He loved the ocean and often would take daytrips with his family to the seashores of Cape Cod, Hampton Beach and Maine to visit the beautiful lighthouses, stroll the main streets or to just take a walk on the beach.  Revere Beach, where he spent a lot of time as a child was also one of his favorite places to go for Bianchi’s pizza.  He also loved going for rides on his Harley with Lisa and eating at restaurants that were featured on Phantom Gourmet.

Robert was a remarkably caring and compassionate person.  He had an infectious smile and sense of humor.  He made friends everywhere he went and was loved by all who knew him.  He was full of life and taken from this world way too soon.  Robert’s memory will live on in the hearts of all who knew and loved him.  He will be sadly missed but never forgotten.

A memorial service will be held at the United Methodist Church in Hillsboro, NH located at 16 Henniker Street on Saturday, September 23, 2017 at 3pm.