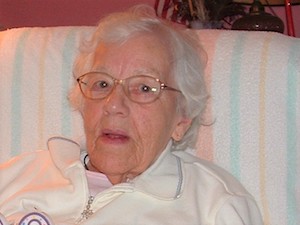 HILLSBORO, NH:  Lillian Titcomb, age 97, passed away peacefully on May 24, 2017 at the Pleasant View Nursing Home In Concord, NH, supported by her loving family.

Lillian was born on January 19, 1920 in Hillsboro, NH, the daughter of Harriett S. Whitney and Harry L. Whitney Sr.

Lillian graduated from the Hillsboro School in 1937.

Lillian was a member of the American Legion Post 59 Women’s Auxiliary in Hillsboro.

Lillian donated the flagpole to the Legion in memory of her brother, Walter, who was killed in action during World War ll.

Lillian loved to play bingo, go to the Flower Shows and to work in her garden and flowers. Lillian enjoyed watching the Red Sox, but her real love was her weekly Scallop Dinners brought to her by her grandchildren, Chris and Michelle.

Lillian was predeceased by her husbands, James McGuire Sr., Harold Titcomb and by her brothers, Harry Jr., Robert, Ernest and Walter all of Hillsboro and by Charles of Antrim.

Graveside services will be at the Butler Cemetery in Deering, NH, on Saturday May 27, 2017 at 4 PM.

Instead of flowers, donations can be made in her memory to the American Legion, Post 59, 538 West Main Street, Hillsboro, NH 03244.