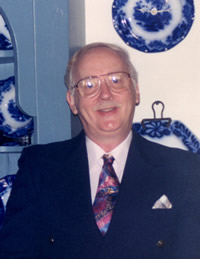 ST. PETERSBURG, FL & BENNINGTON, NH:  David A. Glynn of St. Petersburg, FL, formerly of Bennington , NH, passed away at the Monadnock Community Hospital in Peterborough, NH on May 27, 2017 at the age of 76.

Son of the late Alice (Sylvester) and Horton Glynn, brother of the late Donald Glynn, grandson of the
late Caroline (Gagnon) and Louis Sylvester, all of Bennington.

Survived by cousins Annette (Levesque) Fitzpatrick of Westwood, MA, Walter and Joy (Craig) Levesque of Nobleboro, ME and Richard Sylvester of Manchester, NH

David was known in the area for his excellent cooking and fine dining establishments. His last restaurant, David's Fine Dining in Bennington Center was featured in GOURMET magazine.  His food and hospitality was greatly missed by his patrons across the entire Monadnock area when he retired to Florida.

Once in Florida, his second life passion of antique collecting became his new business, in both NH and FL, with an emphasis on glass, pottery, Wedgewood and a nationally recognized FlowBlue China collection.  It was always claimed that his intense interest in collecting began when he was very young and a neighbor gave him an old postcard.

No matter where he lived, his heart was always with the town of Bennington.  It was no surprise to anyone when he wrote and published two books on the history of the town, which at one time was called Society Land.  His love for the town drove him to found The Bennington Historical Society and with the help of many, built a museum.  He was the source of much information for everyone in town, answering questions from "How old is my house?" to "Who lived here in 1915?" and "Was Mr. C. related to Mr. N. who lived on Francestown Road in 1875."  He knew the history of all Bennington's old buildings.  In short, David knew everything and he learned  by listening to the stories of many people who were the historians of old and are now gone; Georgie Bryer and Verna Pope to name just two.

A celebration of life will be held on July 15 at 11 AM at the Bennington Congregational Church in the center of Bennington. All are invited. Donations may be made in David's name to the Bennington Historical Society, PO Box 50, Bennington, NH 03442