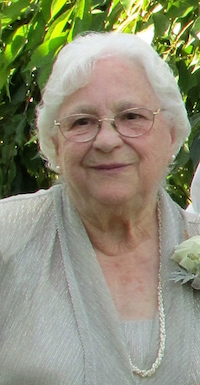 She was born in Billerica, MA, on January 6, 1934 to Jeannette (Poirier) and Victor Chartier.

Margie loved her family and friends.  She grew up in Billerica, then the family moved to Tewksbury, where she lived with her husband and children until 1975, when Margie and her husband moved to Windsor, NH.  They later lived in New Ipswich with their son, Bob and she spent the last five years with her daughter Julie.

Margie had a way of making everyone she met feel like they were part of her family.  She had a huge heart with room for all.  Margie will be greatly missed.

A graveside ceremony will be held at a later date at St. Joseph’s Cemetery in Chelmsford, MA.

In lieu of flowers, donations can be made to the Antrim Ambulance Service, Rte 31, Antrim, NH 03440
Express Your Condolences