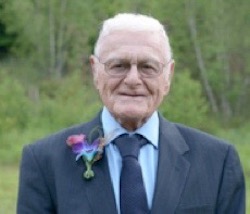 Edward was born March 25, 1925 in New York City, the oldest son of Edward and Mary Cavagnaro. He grew up in Bay Shore, NY, and along with his brothers, Richard and Donald, his sons Glenn and Dennis, and his grandson Ryan, carried on a rich family wrestling tradition through multiple generations.

Ed had a very successful 42-year career with Grumman Aerospace where he met our mother Josephine. They were married in 1944 and together they raised the three of us (Glenn, Dennis and Cheryl) with the dream that their children would attend college one day. Mom and Dad lived long enough to see that dream through, and eventually retired to their home in Deering, NH. He remained active in the Grumman Retiree club for many years afterwards.

Our Dad, Ed, was well known in the community and had many friends. At the age of 70 he fulfilled another life’s dream and acquired his pilot’s license and was very active in his flying club.

Ed was preceded in death by his wife of 46 years, Josephine, his son, Glenn Cavagnaro, and his brothers, Richard and Donald. Edward was grandfather to Lisa Surian, Ralph Bertelle, Lisa Bertelle, Rebecca Nelson, Kellie Cavagnaro, Kasie Cavagnaro, Ryan McLellan and Lauren McLellan. Dad was also a proud great-grandfather to 8 great-grandchildren. He loved spending his time with Jeannette and granddaughter Autumn.

Calling hours will be held Wednesday, December 13, 2017 from 5 to 8 pm in the Holt-Woodbury Funeral Home, 32 School Street, Hillsborough, NH.