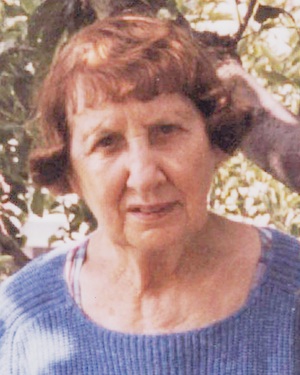 WARNER, NH:  Margaret E. (Iodice) Wunderlich 99 of Warner, NH passed away peacefully at New London Hospital on the morning of August 8, 2017 after a long period of declining health due to Alzheimer’s.

At the time, Margaret was the oldest citizen of Sutton, NH where she moved to in 1969.

She was born in Medford, MA on November 6, 1917 to Margaret and Clement Iodice. Her sisters, Ann, Helen, Mary, Jenny, Mildred, Dolores, and her brother Peter all predeceased her.

In her youth Margaret enjoyed traveling in New England and skiing. She worked for many years for Jordan Marsh Company in Boston, before her marriage to Herman Wunderlich, who passed away in 2013. After her marriage she became an excellent gardener and was much appreciated by those lucky enough to find her roadside vegetable stand. She also loved baking, cooking, and canning and worked many years at the C.A.P. building in Warner, NH where she maintained the thrift shop and food pantry. Margaret’s daughter Gretchen predeceased her.

She was survived by her son John, her son William and his wife Rhonda, all of Sutton, NH, and many nieces and nephews.

The Holt-Woodbury funeral home & Cremation Service is assisting the family.

Memorial contributions may be made to Alzheimer’s Association at alg.org