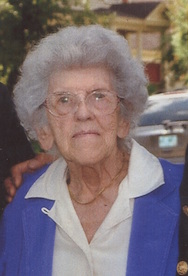 She was born October 11, 1916 to the late George and Mary Anne (St. John) Putnam. She was also predeceased by her husband Sidney D. Livingston who died in 1979, two sons, Sidney Jr. and Forest, and by four sisters, and one brother.

Violet was a secretary of her husband’s lumber business for many years, then worked a few years at Sylvania in Hillsboro, NH.

Calling hours will be held Sunday, April 9, 2017 from 3 to 5 pm in the Holt-Woodbury Funeral Home & Cremation Service, 32 School St, Hillsboro, NH.  Services will follow at 5 PM.

Burial will be in May in Maple Ave Cemetery, Hillsboro, NH.