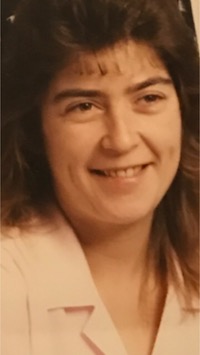 Terri was born September 20, 1963 in Peterborough, NH. She is the daughter of Diane and Robert Waters of Hillsborough, NH, and the late Donald Fales, Sr.

Terri is survived by her sons Joseph R. Overka and his wife Alice of Keene, NH, and Shane E. Overka and his wife Jennifer of New Ipswich, NH; her five sisters, Tammy Buker and her husband Robert of Hillsborough, NH; Robin Waters and her fiancé Michael, of Claremont, NH; Tammy Gionet of Groton, NH; Cathy Tramontozzi and her husband James of Deering, NH, Christina Fales Murphy of Dover, NH; two brothers Donald Fales, Jr. and his wife Rachel of Antrim, NH and Albert Waters and his wife Linda of Lake City, Florida; two granddaughters, Nevaeh and Jazmyn Overka of Keene, NH and four grandsons, R.J. Overka of Franklin, NH and Eric, Zachary and Connor Overka of New Ipswich, NH and many wonderful nieces and nephews.

Terri was happiest when she was spending time with her children and loyal dog, Cody, whether they were all boating (anywhere she could find water), fishing, camping or grilling out.  She loved gardening, arts and crafts, and spending time with family. Terri never went anywhere without a fishing pole and Cody. She worried about everyone else before herself. She was a loyal mother and always stuck by her children through thick and thin. She will never be forgotten.

Private services will be held at the convenience of the family in Harvey Memorial Cemetery, Hillsboro, NH.